SM Supermalls was awarded for its continuous nationwide efforts as the largest private sector partner of the government and its vaccination programs by the DILG, DOH, DTI, and DICT for their unwavering support of the National Vaccination and VaxCertPH Programs, as well as carrying the DTI Safety Seal in all 76 of their malls.

In recognition of the vaccination efforts of the best performing local government units (LGUs), the DILG held an awards ceremony on Tuesday, March 22, 2022 at the SM Mall of Asia, with the opening remarks led by Mr. Steven Tan, President of SM Supermalls.

President Rodrigo Roa Duterte, in a video message, congratulated the winners for their strong leadership during the pandemic and for being valued partners of the national government in implementing important projects that contributed to the country’s improved COVID-19 status.

“Salute to all the recipients of this day’s awards for your robust commitment and partnership with the national government as we altogether implement these programs down to the grassroots. I know and acknowledge that without your support, we would have not surmounted the past two years of this pandemic. Kaya nais kong ipaabot sa inyo ang aking taos-pusong pasasalamat,” President Duterte said. SM Supermalls awarded with Certificates of Recognition by the DILG, DOH, DTI, and DICT for their vaccination efforts

The winners have shown synergy with the government’s implementation of numerous programs, according to DILG Secretary Eduardo M. Año, two years into the COVID-19 pandemic. He believes that the other LGUs can learn from the winners and should strive to emulate their victory.

“The victory of today’s winners are founded on their cooperation and support to these programs which have changed the landscape of the country’s COVID-19 response. Pagbati sa inyong tagumpay at hangad namin na kayo ay pamarisan ng iba pang mga LGU sa bansa,” Año said.

For the ‘2nd Doses Accomplishment’ category, Zamboanga City was named first placer, while Ilocos Norte was the best-performing province in the ‘A2 Doses’ category. Nueva Ecija took first place in the ‘Total Doses Administered’ category. 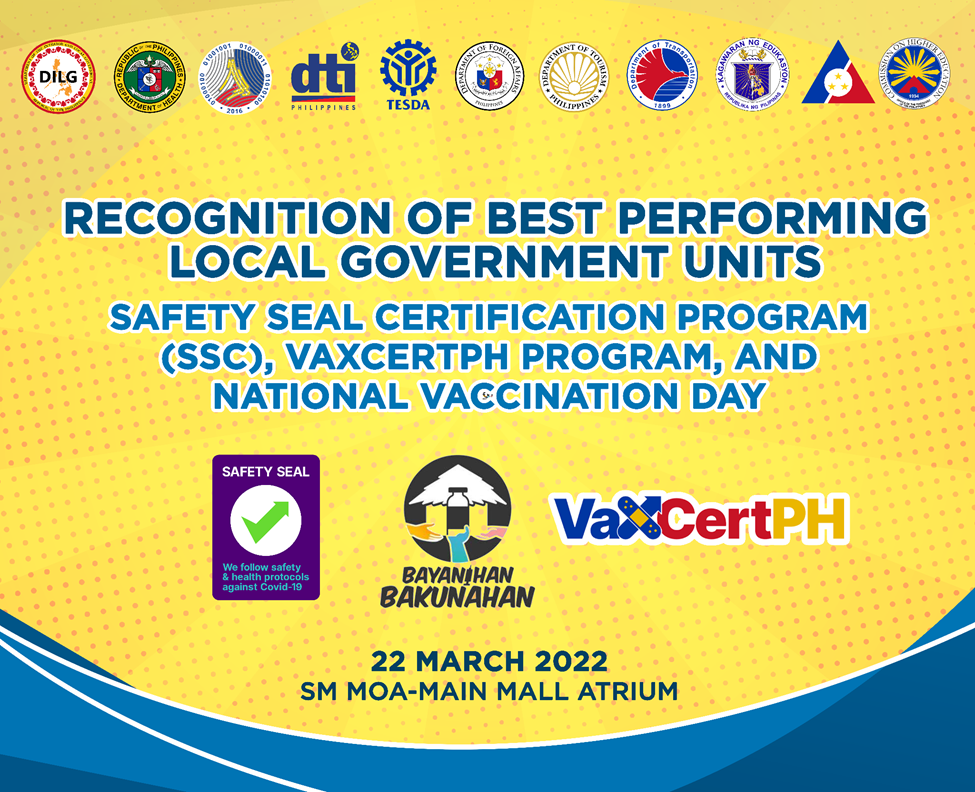 The Safety Seal program grants a Safety Seal to public and private businesses or buildings, signifying that the building or establishment is in compliance with COVID-19 health guidelines.

DILG-Manila City, on the other hand, took first place in the HUC category for DILG-issued Safety Seals with 557. DILG-San Carlos City, Pangasinan, led the CC/ICC category with 284 Safety Seals. Last but not least, in the Municipality category, DILG-Santiago got first position with 289 Safety Seals granted, followed by DILG-Narvacan with 258 and DILG-Magsingal with 208.